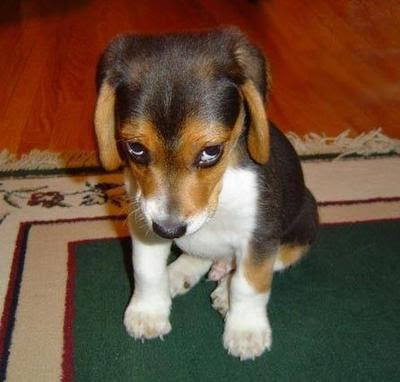 After reading some more at the request of a commenter, it appears that Tim Tebow has not sought a trademark on the Tebow pose itself, but merely on the phrase "Tebowing."

So, just to clarify, I still stand by the following words:

Tebow's legal action is annoying for three reasons.  First, because Matthew 6 commands Christians not to pray to be seen by others.  And even if you weren't originally praying in your signature style to be seen in a pharisaical manner, the fact that the masses have named your prayer posture after you should make it fairly clear that it's time to take it out of the public eye and into the privacy of your room.

I also stand by these words:

Second, when the world mocks you for your faith, the Bible tells us to rejoice that we've been counted worthy, not to threaten legal action against anyone who imitates the way you display your faith without authorized written consent.

If altered to say:

Second, when the world mocks you for your faith, the Bible tells us to rejoice that we've been counted worthy, not to threaten legal action against anyone who attaches your name to the mocking imitation of the way you display your faith.

However, in light of this clarification, I retract and apologize for my claim that Tim Tebow's attempt to trademark genuflection is a great example of the ignorance and arrogance often found in Ahistorical Christianity.  Seeing that this was not what happened, the Tebow example simply doesn't fit and I was wrong to make it based off of the rather misleading article I linked in the original post.

I do not, however, retract my statements concerning this widespread problem of ignorance and arrogance in Evangelicalism and Ahistorical Christianity.  Certainly a better example could have been used, but the problem is very real, as the examples of dispensationalism, pentecostalism, and anabaptism certainly illustrate.

So, again, to Mr. Tebow, I apologize.

Evangelicals, this is why you annoy us.

People like to divide things in half.  Two categories.  Black and white.  Republicans and Democrats.  Team Edward and Team Jacob (although both of these teams are dweebs).

When it comes to Christianity, people try to do likewise.  But when they do so, they usually do it wrong.  The categories of Catholics and Protestants don't work because that leaves out all of those in the Orthodox tradition.  (Also, Lutherans don't really like being called protestants.)  And Bible Believing Christians vs Non-Bible Believers, the preferred designations of your more fundamentalisty crowd, aren't terribly accurate.  Because while Episcopalians may not believe what God says in Genesis 1, Baptists don't believe what God says in Romans 6.

Rather, I would suggest (and have, in fact, already suggested in a comedic form) that, if one is inclined to cleave Christendom in twain, the best way to do it is to make Church history the dividing line.

So despite our manifold differences, Roman Catholicism, Eastern Orthodoxy, Anglicanism, Lutheranism, and a handful of other traditions (FYI: I hate that term) are united in the sense that church history shapes the way we think and teach and worship and have fellowship.  Historical Christians tend to ask themselves questions like, "how have Christians in previous generations done these things?  What have Christians from the past written on these subjects?  What can we learn from those who were taught by the Church Fathers and the Apostles?  What valuable traditions of theirs should we continue?"  Even if we don't get the answers right, these questions are still swimming around in our minds, generally speaking.  And by asking them, we show respect to those Christians before us by assuming that we can learn something from them.

Among Ahistorical Christians, however, such respect is not shown.  It doesn't bother Dispensationalists that nobody believed in the Rapture until the mid 1800's because they don't think their faith mattered.  Baptists seem perfectly unperturbed that no Christians denied infant baptism until the 1500's because they were obviously too foolish to cast off the shackles of Catholic Paganism.  And if you want an example of how Evangelicals also show their disdain for those Christians who have struggled and learned and taught and worshiped before us, you'll find a great one in New York Jets' backup quarterback, Tim Tebow, who has now trademarked his prayer posture, often referred to as "Tebowing".

Tebow's legal action is annoying for three reasons.  First, because Matthew 6 commands Christians not to pray to be seen by others.  And even if you weren't originally praying in your signature style to be seen in a pharisaical manner, the fact that the masses have named your prayer posture after you should make it fairly clear that it's time to take it out of the public eye and into the privacy of your room.  Second, when the world mocks you for your faith, the Bible tells us to rejoice that we've been counted worthy, not to threaten legal action against anyone who imitates the way you display your faith without authorized written consent.

But most of all, Tebow's legal action is annoying for this reason.  He's not "Tebowing."  He's genuflecting, something that many Historical Christians have been doing as an act of worship for a really, really long time.  Check it out:

Here are some genuflecting Orthodox folks. 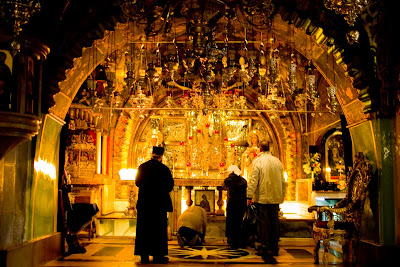 Here's are some genuflecting Anglicans. 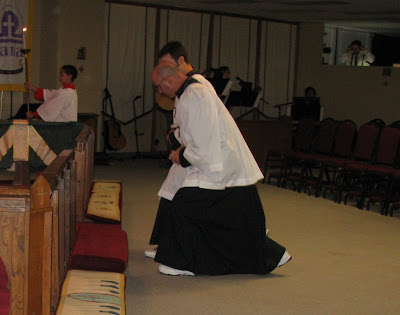 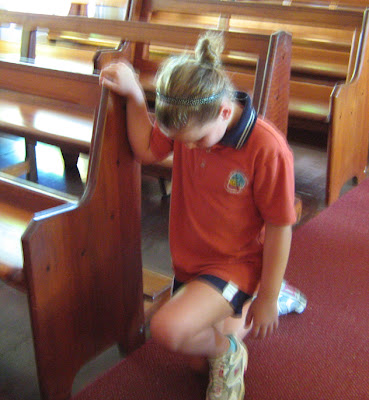 Even Lutherans genuflect.  Not me personally, but a guy I know. 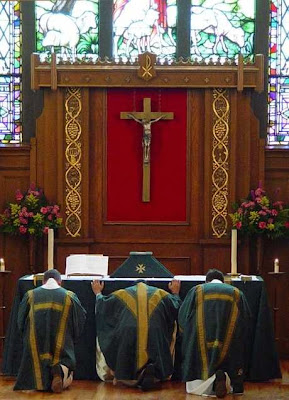 Oh, and lest you think that all these Christians were just jumping on the Timmy Time bandwagon, here's the Angel Gabriel tebowing before the Virgin Mary in a painting from 1490: 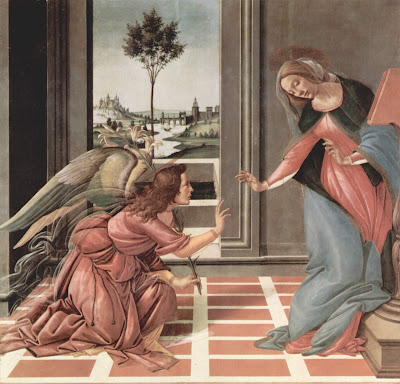 Clearly Tim Tebow wasn't the first person to pray or worship on one knee with arm(s) extended forward.  In fact, bagillions of Christians have been doing his schtick for centuries.  And Tebow not knowing that is a pretty excellent example of the ignorance of Evangelicalism that drives other Christians nuts.  Furthermore, Tebow presuming, via this trademark, that genuflecting is his intellectual property is an excellent example of the equally irritating arrogance that comes when you don't think you'd have anything to learn by asking, "How have other Christians done stuff prior to last Tuesday?"

So to my Evangelical friends, I highly recommend asking yourselves that question.  I highly recommend diving into Church history, into the traditions and practices and teachings of Christians who lived a long time ago, long before Mark Driscoll or even Billy Graham.  Do that and you will find a faith that is far richer and stronger than anything you've ever tasted before, a faith that isn't subject to the whims of fads or societal mindsets, a faith that will still be standing when American culture has crumbled to dust.

And to my friends who have already discovered the joys of Historical Christianity, I highly recommend holding the Scriptures in even higher regard than tradition.  Do that and you might just find Lutheranism:-)
Posted by Pastor Fiene at 11:10 AM 19 comments:

When advocates of historic Lutheran worship argue against the widespread use of contemporary worship, in particular the use of Contemporary Christian Music (CCM) in the Divine Service, they often do so using a syllogism that looks something like this:

In my experience, most Lutheran advocates of contemporary worship do not argue against the major premise.  So we all seem to agree that it's better for a hymn to tell me about Jesus than to tell me how great the hymn writer feels about Jesus.  And that's good.  Rather, the response I have seen most often from contemporary worship advocates is an argument against the minor premise, the assertion that "historic Lutheran" equals good and "CCM" equals bad.  Quite simply, they counter this syllogism by arguing that there are plenty of bad Lutheran hymns and plenty of good CCM songs.

But, interestingly enough, when it comes to defending their counter-argument through the use of examples, things get very one-sided.  Are these Lutheran advocates of contemporary worship ready to hand us a big fat list of our most cherished compositions that fail to meet the rigorous standards we require of CCM songs (standards such as this)?  Yes, they are.  Do they have countless examples of rather bad "good, Lutheran hymns?"  Absolutely.

But do they also have any examples of really good CCM songs?  In fact, forget "any."  I'll settle for one.  Do they have even one example of a CCM song that is as deeply and doctrinally and poetically focused on the Cross as the best of what we have in our hymnal?  Can they give us just one example?

Can they?  Maybe.  But have they? No, at least not that I've ever seen.  And that's not good.  Because when Christ calls us to be one body, and when you're using music that has been and still is causing division in that body, I think your fellow believers deserve to have their criticisms met with a better response than, "well, you use stuff that's just as bad."