How To Be an Awesome Lutheran Father: Director's Commentary 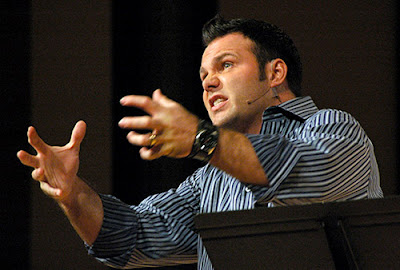 Of all the Sunday morning services that I attended in my youth, the one I remember most was when I was in fifth grade.
Unlike many congregations, which have two seats on opposite sides of the chancel for acolytes, the congregation my father was serving at the time had the practice of requiring acolytes to sit next to each other in the front row.  Like many other practices in life, this practice generally worked out just fine.  Except for when the people involved sinned.  And that's what I was doing that morning when, instead of listening to my father's sermon, I was joking around with my friend and co-acolyte, Michael.
I'm not sure what we were snickering about.  But whatever the source of the laughter, it was loud enough to cause my father to stop in the middle of his sermon and tell me to be quiet because what he was saying was important.  And while I certainly was terrified in that moment (I know it was a long time ago, but the good folks at St. Peter's might want to give that acolyte robe one more trip to the dry cleaners), the emotion I remember feeling most strongly was embarrassment.
But as embarrassing as this was for me, what I didn't realize until I had kids of my own was that this was even more embarrassing for my father.  You see, no decent father ever wants to bring attention to the fact that his child is being terrible.  And he especially doesn't want to bring attention to that when he's doing his job.  But any decent electrician father in the world in the world would dive headfirst into that embarrassment if that's what it took to stop his daughter from sticking a fork in a light socket.  Any loving chemist father would scream at the top of his lungs to stop his son from taking a sip of hydrochloric acid.  And any pastor father worthy of either vocation would call out his kid from the pulpit if that's what it took to let the kid know that busting a gut over Jeffery Dahmer jokes during the Divine Service is not acceptable.
So while, at the time, I loved my father in spite of that moment, as I've grown older and grown in the faith, I've come to love my father even more because of that moment.  Because that was a moment in which my father taught me that, more than anything else in the world, he wanted me to be a Christian.  And if the only way he could smack some Christian piety into me was to embarrass himself in front of the entire congregation, then so be it.  Because my soul was that important to him.
And so, if you want to be an awesome Lutheran father, that's how you do it, folks.  And, in the offhand chance that you don't have a pulpit from which to yell at your rotten kids, here are a few other ways to increase your concordiawesomeness:
Posted by Pastor Fiene at 8:14 PM

And the video is terrific, too.

Dang. I wanted an excuse to argue some more.

Last month I shared with you a video series entitled, “Things Your Lutheran Pastor Loves to Hear”. It is good, witty truth. This is my second favorite clip. I can’t tell you how many times I have been accosted by “Christian” sales people promising to do what only God said He could do.