An anonymous friend wrote this article and asked me to publish it here.

This brother is not alone in his struggles.  And while I believe it's meet, right, and salutary for a pastor to feel a sorrowful sting every time he looks down from the pulpit and sees that no nursing children or newlywed couples have taken the seats of the saints he's been burying, he ought not feel like a failure.

When we look at a congregation of senior citizens who cling too tightly to the past with one hand and perhaps not tightly enough to the Word with the other, we see something to disdain.

But this is not what Christ sees.  Rather, Christ sees a flock of wrinkled sheep that He will never cease to feed and love and defend, a collection of saints that He is still preserving with His life, even when all five of our senses tell us that death has already consumed them.

So no matter many times you've received no response when you've commanded Lazarus to arise, and no matter how hoarse you've grown from calling out his name, keep shouting.  You do not speak this word in vain.  And Christ will continue to bring life and resurrection through your lips that preach and your hands that baptize and commune. 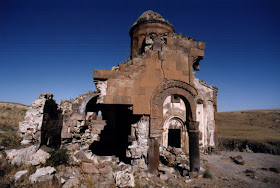 Burying a Church
by an anonymous Lutheran pastor

Once, my wife told me that she thought that my strength as a pastor was comforting the bereaved, preaching at funerals, burying the dead.

I was angry with her for saying that.  But she said that she meant it as a compliment.  “That’s probably the hardest thing for a pastor to do,” was something like what she said.

Burying people is probably near the top of the list of things I have done consistently and successfully as a pastor.

But I bury between 20 and 25 people every year.  About two people a month.  My work among the living is like a civil war officer trying to keep his command from routing, trying to get them to advance, to keep advancing.  But ground is lost every day.

My work among the dead and the mourners is a constant labor during which I am largely isolated from the congregation, preaching to family members who are alienated from the church or who have forsaken the Lutheran church for communions that still seem to win victories.

Burying the dead often seems to be my real work, that and caring for those for whom death is now a houseguest. Preaching and teaching to those who are still healthy feels like preaching to the deaf, or like saying, “Lazarus, come forth!”  and he doesn’t.  Or like a ghost preaching to a congregation of ghosts.  Trying to work with the congregation’s leaders to administrate feels often like the restless movements of the bedridden—not only on their part but mine.  So much not only of what the congregation wants, but also of what I want—perhaps it is vain.  We think we are living and we can make things happen.  We feel like it is our responsibility.

One of the reasons why it is possible to comfort the bereaved and to comfort the dying is because I do not feel as though I am responsible to stop it.  With a congregation it is different.

When I first arrived at the congregation I was confident that I could get people fired up and working together.  That’s poor theology, but theology is easily diverted or diluted by what we want and what we need—what I would be more quick to call “idolatry” in the face of congregational criticism.

Six years in, I feel utterly powerless and mostly exhausted.  You try to rally the troops and lead some charges, not realizing that many of the troops have been on many charges and are too tired to do it anymore.  But a few go with you, maybe against their better judgment.  Probably as many more want you to fail.  And the mass don’t pay any attention.

After awhile, you can’t do it anymore.  The politics within the congregation continues.  The numbers decline in church and school.  There’s no time to go after the sheep who are never join the rest of the flock by the pulpit and the altar.  There are no volunteers to help give rides to church or check on why others aren’t attending.  They’re overwhelmed with the inroads the enemy makes into their areas of responsibility—their children, grandchildren, sick parents and spouses.

And yet—the death of a congregation can be averted—can’t it?  Should we always chalk it up to God’s hidden will?  Or does God sometimes allow the congregation to decline because He wants His congregation to seek Him?  He hides Himself, desiring to be sought?  He wants the congregation to examine herself, to fast and pray for the lost sheep, to listen attentively again to His Word?  “In their distress they shall earnestly seek me…” Where is that verse?

Even with dying people we counsel them to accept God’s will as coming from the hand of a gracious Father.  “He who did not spare His own Son, but gave Him up for us all, how will He not also with Him freely give us all things?”  Yet we also do not stop praying for the recovery of the dying—if it is God’s will.

Often with the elderly it isn’t easy to know what to pray for, particularly if they’ve been suffering a long time.  And yet, I’ve seen families who—with good intentions, out of love—keep telling a dying family member, “It’s okay, grandma…it’s okay to go see Jesus now.”  But they don’t realize that sometimes it is not okay; it’s not because grandma doesn’t want to go.  She’s wanted to go for days or weeks; she is tired of the pain.

But God is not ready yet.  He says, “No”.   But we keep telling grandma it is alright to go now, as though grandma decides when she lives and dies.

Because death is inevitable, we don’t want our loved ones to have to keep fighting it forever.  But burying a church?  It’s different.  There are young people and old people in a church.  There are those who are tired and those in the midst of their years; and there are children and infants from whose lips God has ordained praise, to silence the foe and the avenger.

This often angers me.  But we’re in different places.  I’m 35 and this is the first congregation I’ve served.  This person is 80 something.  This person has had enough and no longer has the energy to keep leading charges.  Even though I’m worn out, if I was convinced it would accomplish something and I could get anyone to come with, I could probably lead scores more charges.  Let’s paint this!  Let’s convert that!  Let’s show mercy here!  Let’s study this!

But if I get this tired at 35, I can only imagine how I’ll feel at 85.  I would not give an 85 year old a guilt trip for not wanting to endure radiation treatments or chemotherapy.

But a congregation doesn’t exist only for 80 year olds, even if they are the majority.  What about the 35 year olds?  What about the 20 year old mothers in the projects up the streets, and the 7 year olds with no father who don’t know the gospel of Jesus Christ?  What about the children who are the age of my son?  They are the ones who are going to have to come of age in a country in which the wealth and power we enjoyed have become ruins.  They are going to see the collapse of the great tower of Babel built by our great grandfathers, where the church and the Greeks and the Romans were built together in a great city that housed  Bach’s music and Luther’s theology as well as Thomas Jefferson and Robespierre and Nietzsche and Freud.  All of that is going to be a ruin by the time my son is older.  It is already becoming a ruin.  But then the barbarians will be scavenging marble from the aqueducts to build fortifications and vandalizing the statues of Apollo.

It’s easy to preach the pure Gospel at a funeral and say, “Your mother doesn’t have to lead anymore charges.  She rests with Jesus.”

How can a congregation want to die?  “Why will you die, O house of Israel?”  “Whoever wants to save his life will lose it, but whoever loses his life for my sake will find it.”  Much of the congregation wants to die.  Or doesn’t want to avert it’s death.

Because death is upon it.  Sennacherib is surrounding the city.  But no one humbles himself before the Lord.  The church does not pray and fast or weep in dust and ashes.  The congregation does not rouse itself and seek the word of God.  It wants the good days to come back, and if they won’t come back, then nothing is worth working for or saving.  Let our children live in the ruins like owls in the wilderness.

But I think there’s a problem with my preaching and theology, too.  I scold the congregation, as though the dead could raise themselves.  Or as though the lame could strengthen their own wobbly knees.

There may still be time left, but the congregation is no more able to contribute something to its own healing than the mourners are able to comfort themselves.  Mourners try to do that a lot.  They invent false comforts.  “He’s in a better place,” is the one we hear most frequently.  The funeral homes print stupid poems up on cards: “When you stand at my grave, do not weep.  I am not there.  I do not sleep.”

The first task is to take those away without giving the impression that you’re sadistic and you hate them (if possible.)  But it can be done, if there is compassion.  Because no one really believes the stupid poems.

Probably this has been one of my gravest sins in the ministry—that I foolishly preached and acted as though the congregation had any resources to effect its own repentance.  Or as if I had them.

No, neither the minister nor the congregation has the resources to prevent its death. Repentance and renewal in faith and the continued existence of the congregation are in God’s power alone.  All of the three depend on His will alone.

Perhaps I should pray, “Lord, grant the congregation repentance and spiritual renewal.  And grant me to preach Your Word rightly, so that I don’t act as if our salvation is in our own hands.  And if it pleases You, let the congregation continue to proclaim Your Word and Your mercy to the next generation.”