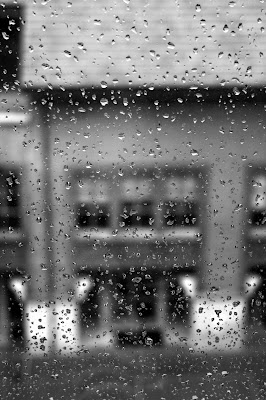 Virginia woke one morning to the sound of thunder and church bells.  "Oh, that's right," she thought.  "It's Sunday.  But the weather sounds terrible, and I have a lot of things to do around the house this morning.  So maybe next week."

Seven days later, the bells sounded again, their metallic clang ricocheting off the growling thunder and the drum roll of fat raindrops slapping the pavement.  "I know, I know," she told herself.  "It's been awhile since I've been to church.  But it's really nasty out there, so I'll just wait until things clear up."

But things didn't clear up.  With each passing season, the bells never rang without an accompanying rain shower.  For weeks and months and years, Virginia's Sunday morning windows rattled from the one-two punch of the bells and thunderclaps.  As she graduated and got married, as her children grew from infants to toddlers to teens, the roads remained far too slick to hazard a trip to the church.

Then, one Sunday morning, the rain stopped and the sun began to shine.  A soft heat began to radiate on Virginia's Sunday morning windows.  And even though the bells didn't clang that morning, Virginia told herself, "ok, now I'm ready.  Now that the rain is done, I'll go back to church."

But when she pulled into the lot of that old building, she didn't have to fight anyone for a parking spot.  She was the only one there.  Getting out of her car, Virginia saw that the church doors were locked and the windows were boarded.  Peering in through a crack, she saw that the font where she'd been baptized was dry, the altar where she communed was bare, and the pulpit where she heard the word was empty.  Then, stepping onto the same grass where she'd done cartwheels while her parents shook the pastor's hand on the Sundays of her youth, Virginia saw that the ground was now pierced with the shards of that bell she'd heard calling her for so many years.

So Virginia sat down and wept.  "There used to be so many people here.  What happened?" she asked herself aloud.

"They got old and died," a voice responded.

Virginia looked up and saw the gardener standing in front of her.

"And the younger generation, people like you, they didn't come back, at least not in time."

"O you of little faith," the gardener replied.  "It was the rain that made the bells ring."

I'm tempted to forward this to some of my fellow parishioners. Of course, as an Orthodox, I don't take the specifically Lutheran angle of the post, but I think it's easy enough to see how this can be applied to any Christian community. It's a truism to point this out (but of course I'll say it anyway), the problem characterized in the story is not exclusive to just one confession.

Anyway, I've enjoyed your Lutheran Satire and some of your essays that I've read here, Pastor Fiene. This is a pretty good post too.